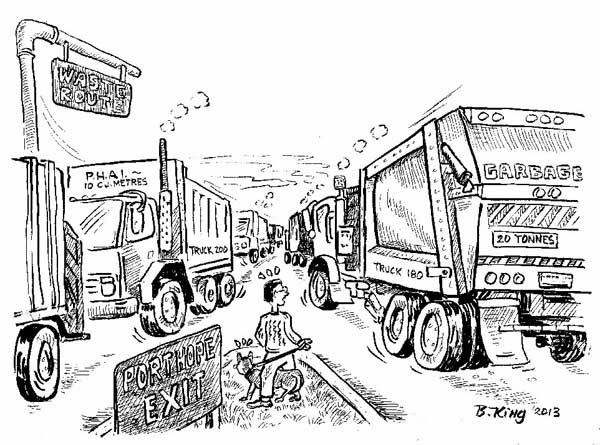 Incinerator would hurt more than help

I’m very angry. And maybe you will be, too. ENTECH-REM wants to build a mega-incinerator west of Wesleyville Road, south of Highway 401, right in the middle of some of the most picturesque farmland in Northumberland County. You’d think that the Council of the Municipality of Port Hope would have learned its lesson from the stigma attached to its nuclear waste and the subsequent lengthy cleanup, and therefore would not even consider such a proposal. But perhaps it has been seduced by the prospect of filling the town coffers with tax revenue, and the prestige of being the only plant of its kind in North America.

Landfills can’t continue to accept our garbage forever; so, burning it seems like a good solution. The problem goes away, along with our garbage. Or does it? When something sounds too good to be true, it probably is. Nothing ever disappears. After incineration a solid residue called bottom ash is left behind. And what happens to that?

Although REM’S installation will release a multitude of toxins to the four winds, no one has consulted the citizens of Northumberland County and surrounding area, asking for permission to contaminate the air we breathe. I must stress that not all Port Hope town officials are in favour of this plan, but those who support it are thinking only of the perceived benefits to Port Hope, heedless of the negative impact on their neighbours. And that makes me furious.

This behemoth, which will require fuel 24/7, reminds me of the monster plant Audrey II in “Little Shop of Horrors,” which constantly demands, “Feed me!” And when there isn’t enough residential garbage to do that, will industrial waste be sent to the furnace? Will the ferocious appetite of the incinerator remove incentives to reuse, recycle and compost? Shouldn’t we concentrate our efforts on striving to produce less waste in the first place?

As artist Barry King so beautifully illustrates, dozens of heavy trucks carrying away low level radioactive waste will be joined by up to 180 others per day, hauling in garbage from a 100-km radius. And of course all those trucks create their own pollution, as well as road damage. There is a certain perverse irony here. Port Hope recently spent $100,000 re-branding itself as “…an urban-rural paradise…nestled in a valley extending through miles of striking natural landscapes…” (September 2012 report found on Port Hope’s website)

REM’S technology is unproven in this hemisphere. The technology is in a few operations in Malaysia, Singapore and Poland, places which do not have the tough environmental standards that exist in Ontario. On its website, REM lists Port Hope and Brant County under “Current Projects,” even though Brant has rejected REM’S offer and Port Hope has yet to make a decision. (www.remenergysolutions.com/Projects) How deceptive is that?!

At the end of the incinerator’s 25-year lifespan, who will be responsible for cleaning up the site? REM is a private company. Will government dollars pay the bills?

The citizens’ group Port Hope Residents 4 Managing Waste Responsibly (MWR) has done extensive research on the REM proposal. Go to www.phr4mwr.ca and read the material, particularly the speech delivered last fall by Dr. Stan Blecher. You will find the e-mail addresses of the Port Hope mayor and councillors. Write to them individually, expressing any concerns you have.

MWR will hold an information meeting next Wednesday, April 24 at 7 p.m. at Port Hope High School. An expert on incineration will speak against REM’S proposition, and a senior official from Markham will describe how her city will be able to recycle 80% of its waste by 2014. If this incinerator worries you, as it does me, please be there!